Probably the best commentary in the world

I've been thinking a lot lately (the last month or so) about the state of community in New Zealand.

I was delivering little booklets for church the other day to a few streets around and including Mahia Road, and was quite surprised at the state of properties in this area.

This neighbourhood is clearly full of residents who simply don't care about their property.

This is not however a poverty issue. This is people choosing to live in a pig sty.

People talk of the 'good old days', when;

This is no longer part of New Zealand Society, especially places like South Auckland. Why?

Actions that we may considered the right and safe thing to do at the time, I think, are in fact contributing to the escalation of crime.

In response to crime we;

Because 'good' people no longer live or venture into 'bad' areas what hope do these area have to become 'good' again?

Because we have insurance it doesn't matter that the police don't have time for petty crime. sure it's an inconvenience but we got our money back.

Because we all have big locks and alarms people who happen to leave something unlocked 'deserve' to have their house broken into.

As a community we are withdrawing, and as we, rightly or wrongly, withdraw, we are creating space in our community. If it's not good upstanding members of the community filling this space then then who will fill this space?

All that is necessary for the triumph of evil in our community is for good men to hide behind bigger locks, taller fences and more comprehensive insurance.

The Media are at it again

Again an example that the media are not neutral.

On this page on the TV3 website I saw this heading...

Sue Bradford is a Lair!

In the face of massive public rejection of her Anti-Smacking Bill Sue Bradford blames this on the 'fact' that the opponents of her bill are 'mis-informing' the public!

If you go here and watch the video of Sue on Close up. At around 3:50 on the time scale Sue start to ramble about the label 'Anti-Smacking' that has been given to her Bill. She claims that it's not an Anit-Smacking bill, she never called it that, and blames this 'mis-information' on the opponents of the bill.

Further on in the video of Close-Up Simon Barnett, who did an awesome job in the interview, explains how Sue had told him in a radio interview that if she saw him smack his child in the supermarket she would report him to the Police. He went on to ask how can he be garanteed to not face prececution for giving a light smack. Hone Harawera's responce was "don't smack your kids".

Sue and Helen stop lying to the New Zealand Public... This is an 'Anti-Smacking Bill'

People of the land...

If you've done that already then you can go here and see how it's going.

I don't want to condone any behaviour of Clint Rickards (or Brad/Bob) but 'm very concerned!

I'm concerned at the number of high powered people making comment on the court cases. People basically implying that he is guilty when a jury (who actually saw all the evidence) has found him not guilty. Basically saying that the jury got it wrong!

Yet look at the outcry when Mr Rickards himself said the jury got it wrong when he defended his "mates".

What is happening to our country

My Wife and I went to an open home yesterday and were away from the car no more than 10 minutes. While we were gone this happened... 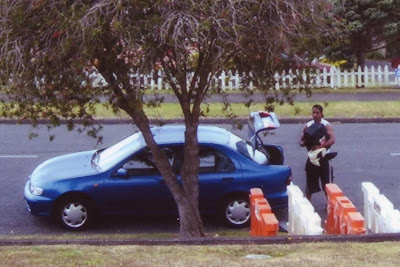 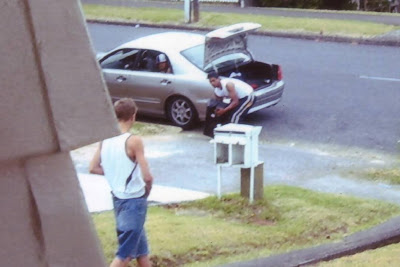 The only thing visible in our car was a sports bag with tennis rackets, and these punks were prepared to break into a car on the side of the road in broad daylight at the promise of no more than a bag and 4 tennis rackets. Unforunately for us there was more stuff in the boot. All in all about 4k worth of stuff was taken.

The car the offenders used, a gold Mitsubishi Diamante ATS249, was a stolen vehicle. We have photos of the offender offending. We were on the scene within seconds of it occurring. We have at least 1 witness to the event. And we have the address of the offenders mate. And yet despite all this 'in our favour' the cops still did not deem this important enough to attend to.

Believe it or not...